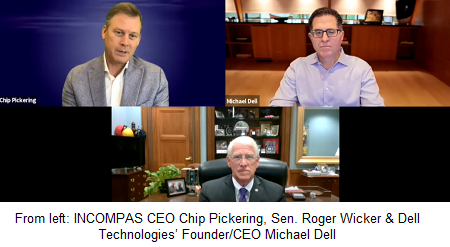 Concerning the maps, Wicker said in Mississippi, they show the state has 98 percent broadband coverage, a claim the Senator called “utterly ridiculous.” Yet he recognizes the agency needs $65 million to implement changes. Continue Reading
Posted by Inside Towers at 8:54 AM No comments:

Wireless Emergency Alerts are now more geographically targeted and the FCC expects that to improve over time as more updated smartphones reach the market. Since last December, in response to FCC rules changes, participating wireless providers are required to deliver alerts to the entire area targeted by emergency management officials with no more than a one-tenth of a mile overshoot.

If that’s not technically feasible, wireless providers must continue to deliver alerts to their best approximation of the target area, the agency standard since 2017. That’s a big change from when the WEA system began in 2012 and alerts were sent on a county-wide basis.

Posted by Inside Towers at 8:27 AM No comments:

County on Cloud 1 Over Lawsuit

Cloud 1 Services, LLC filed a lawsuit on Thursday against Madison County, Iowa, and its Board of Adjustment for denying its applications to construct cell towers within the county. Law Street reported that the complaint was filed in the Southern District of Iowa, and Cloud 1 has requested an expedited review of the action. In May, Cloud 1 submitted applications for Special Use Permits (the ‘Macksburg Application’ and the ‘Winterset Application’) to install two 300-foot towers to support AT&T services, including FirstNet on land zoned agricultural. Both properties were chosen based on coverage location and owners willing to enter into lease agreements.

In August, the Board of Adjustment held a public hearing. It determined that the applications were “consistent with the Madison County Comprehensive Plan,” and no effects were identified that “would result in any detrimental impact on adjoining or neighboring properties,” nor would it affect property value. However, at the end of the meeting, the Board unanimously denied both applications. Continue Reading

Posted by Inside Towers at 9:17 AM No comments:

The U.S. Air Force is looking to recruit companies to install cellular infrastructure on at least fifty more of its military bases. Verizon has already partnered with ten bases across six different states and is continuing its 5G rollout, reports GCN.com. Bringing high capacity LTE service to cellular users will be the first step on the march to advancing 5G. The full solicitation can be seen here.

In what it refers to as "fence-to-fence coverage,” the Air Force is making it easier for providers to add outdoor small cell antennas to the leased property within the base to improve the level of connectivity. The process includes a government Lease for Cellular Infrastructure that will allow a provider to operate at no cost to the government. The solicitation reads: “The goal is to team with commercial industry for the installation of additional cellular infrastructure to deliver expanded coverage and increased capacity on Air Force bases. To ensure all bases receive enhanced cellular coverage and capacity, the Air Force is grouping bases into regions and evaluating commercial lease opportunities to identify the best solution for each region. This opportunity is focused on Phase II USAF Midwest, which includes 20 installations ranging from Arizona up to North Dakota.” Continue Reading

Posted by Inside Towers at 9:28 AM No comments:

Verizon and Samsung Have 6.6 Billion Reasons to Make 5G Work

Verizon's $6.6 billion handshake with South Korea's Samsung Electronics is being seen by analysts as a huge sign of faith between the two companies and the future of 5G development. The contract was inked last week, reports Yahoo Finance, and is quite a boost for Samsung's networking gear operations. “With this latest long-term strategic contract, we will continue to push the boundaries of 5G innovation to enhance mobile experiences for Verizon’s customers,” stated Samsung in an emailed announcement.While Huawei still supplies much of the world's telecommunication components, its influence is shrinking as countries like the United States and Australia fear security breaches and ban the use of their products. Samsung, however, is on the rise and is currently the world's largest producer of memory chips and electronic support circuitry, according to the account. The company's decision to tackle the global market has affected not only rival Huawei, but also leading players like Nokia and Ericsson. Continue Reading

Posted by Inside Towers at 4:57 PM No comments:

On June 4, first responders arrived too late to save a drowning 16-year-old in the Potomac River, reported WTOP News. Now, the reason for the delay is under investigation, putting a series of transferred 911 calls, confusion over the victim’s location, and a decades-old policy on emergency agency jurisdiction under the microscope.

In a Loudoun County Board of Supervisors meeting on September 1, a 77-page report — jointly conducted by the fire and rescue departments of Loudoun County, VA and Montgomery County, MD — revealed operational and technological shortcomings that lead to the death of Fitz Thomas. The teenager was swimming with friends, who placed emergency calls from cell phones received by operators in both Loudoun and Montgomery counties. Loudoun County Fire Chief Keith Johnson said efforts were hampered by technical issues, difficulty ascertaining the teen’s location and a long-standing response protocol. Continue Reading

Posted by Inside Towers at 9:37 AM No comments:

The FCC proposed a $163,912 fine against an internet service provider for apparently overstating its subscriber numbers. The figure, levied against Barrier Communications Corporation d/b/a BarrierFree, is the maximum amount allowed by law.

In a revised March 2018 filing, and in September 2019 and March 2020 filings, the agency said BarrierFree apparently reported having vastly more broadband subscribers than there were housing units in the Suffolk County, New York census tracts where it reported providing service. The company also apparently failed to submit its March 2019 broadband deployment data Form 477 filing, provide accurate responses to Letters of Inquiry issued by the Commission’s Enforcement Bureau during the investigation, and fully respond to inquiries.

In proposing this fine, the Commission also explained that BarrierFree apparently failed to file any Form 477s before 2018, even though the company had been offering service since 2004, and “vastly overstated” its broadband deployment in its original March 2018 Form 477 filing. However, the Commission acknowledged that those apparent violations of Commission rules fell outside the one-year statute of limitations. Continue Reading

Posted by Inside Towers at 8:31 AM No comments: