It is always worrisome when your personal information is in the hands of someone else. This is what the employees at Crown Castle are experiencing after someone hacked into the company’s payroll account. eSecurity Planet reported that, “On October 31, 2013, the company determined that an unknown person or persons bypassed Crown Castle’s security system and accessed an e-mail containing an attached payroll file that listed U.S. employee names, Social Security numbers and compensation” Crown Castle CEO W. Benjamin Moreland reassured employees that the company has taken very aggressive steps to address this matter and they are conducting a comprehensive internal investigation of the theft.

Read more at InsideTowers.com.
Posted by Unknown at 9:43 AM No comments:

After troubleshooting a carrier’s equipment failure on an SBA Communications tower, Douglas Klein began making his descent down a 340-foot tower in Wichita, Kansas when he fell. The 27-year old tower technician died Sunday, November 24th as a result of injuries he received on Saturday. An employee at the cell site called 9-1-1 around 5:15 on Saturday saying the man had fallen approximately 60 feet. Wireless Estimator reported that, “According to workers familiar with the accident, the crew was working for Ericsson on a Sprint Network Vision project maintenance call. It is not known if Klein’s equipment failed or if he disconnected to get past an intermediate cable guide, but a co-worker said that he was attached to the safety climb during his initial descent.” Klein is the 13th tower technician fatality in 2013, which is the highest number of fatalities that have occurred in this industry since 2006 when there were 19 fatalities. Many of the wireless carriers are working as quickly as possible to deploy their new 4G LTE equipment, which puts pressure on tower workers to complete their jobs in a timely manner. This hurriedness can often lead to missed safety precautions and even workers taking the chance of free climbing. Free climbing is when a person who is climbing a tower isn’t connected to a fall arrest system.

Read more at InsideTowers.com.
Posted by Unknown at 9:57 AM 1 comment: 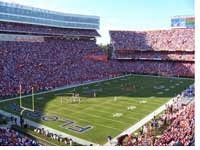 When the stadium at the University of Florida in Gainesville was packed with students and fans alike, it used to be difficult to share those exciting Gator moments with friends and family. This is why AT&T has installed new 4G LTE Distributed Antenna Systems and cell sites to provide additional wireless coverage on campus and in Ben Hill Griffin Stadium. “When our customers head out to the stadium to cheer on the home team, we want them to have a great network experience throughout the game no matter what they’re doing – whether that’s making a call, checking email, downloading apps or surfing the Internet,” said AT&T Florida President Marshall Criser, lll.  “With initiatives like Project VIP, we’re continuing to invest in the wireless network, and providing enhanced wireless coverage at the University of Florida’s Ben Hill Griffin Stadium and elsewhere on campus are just a couple ways that we’re investing in Gainesville.”

Read more at InsideTowers.com.
Posted by Unknown at 9:00 AM No comments:

Tower Industry in Africa Expected to Double: Will US Companies Take Part?

In 2011, American Tower Corporation entered the South African tower market where they now own 1,621 towers. Chief Operating Officer of Helios Towers Africa, Kevin Koch, spoke at AfricaCom2013 in Cape Town last week and presented an optimistic outlook for the tower industry. According to Richard Cutcher of HumanIPO, “According to HTA figures, there are currently 150,000 towers in Africa of which only 15 per cent are owned by third-party companies such as HTA, Eaton Towers, ATC and IHS. Due to Africa’s rapidly rising and young population, Koch expects the total number of towers to double within five years, while the proportion of those owned by independent companies will double in one year.” American Tower Corporation focuses mainly on the North American tower industry, but is also expanding their international footprint. This may be the perfect time for them to grow their presence in the African region. HumanIPO reported earlier today Bharti Airtel is believed be in discussions over the sale of its 15,000 towers to a third party for US $1.8 billion, while Etisalat Nigeria is also thought to be in discussions over a US $400 million sell-off of its 2,500 towers.
Read more at InsideTowers.com.
Posted by Unknown at 10:04 AM No comments:

Yesterday, a handful of companies in the wireless industry announced their commitment to recruiting, training, certifying and finding jobs for 5,000 veterans over the next three years through a new nonprofit organization entitled Warriors 4 Wireless (W4W). DYNIS, PCIA (the Wireless Infrastructure Association), Competitive Carriers Association, T-Mobile, MasTec, PricewaterhouseCoopers are the companies committed to launching this non-profit organization. Warriors 4 Wireless was formed to bridge the gap between the demand for trained and deployable wireless technicians and the thousands of qualified servicemen and women eager to transfer the skills they learned in the military to civilian careers. “DYNIS created W4W as a way to give back to our military veterans and revolutionize the wireless industry,” Earl Scott, CEO of DYNIS and Co-Founder of W4W said. “We are thrilled that the program has grown into an industry-wide effort, independent of us, supporting thousands of veterans as they make the transition from military to civilian careers.”

Outside the FCC workshop on e911 location accuracy in Washington, DC members of law enforcement, public safety, and emergency response units gathered to display a banner urging the FCC to establish a measurable level of location accuracy for wireless emergency calls. Because there is no exact location assigned to your cell phone, the only way to determine where you are is by using nearby cell towers to pinpoint your whereabouts; however, this takes some time that these organizations don’t always have. Data recently released by the FCC shows that, in some states and localities, upwards of 2/3 of wireless 9-1-1 calls are delivered to the emergency call center without accurate location data, leaving emergency responders unable to send help to people who cannot tell or do not know their locations.

We all know what it’s like to be at a game or a concert and want to post a picture to your social media sites and just not being able to connect to the network. This was often the case for AT&T customers who frequented the Bronco’s stadium in Denver, Colorado. AT&T set out to rectify this problem and put almost $10 million into a network upgrade at Sports Authority Field at Mile High. They added the equivalent of 11 cell towers, all dedicated to serving AT&T customers at the Bronco’s stadium. The network equipment is housed in a nondescript building adjacent to the stadium that now serves as AT&T’s largest cell site in the Rocky Mountain region. In August, Russ Trainor, the Vice President of Information Technology, shared that, “I think from where we’re at now we’re at a good point in technology-wise compared to other venues. And we’re still driving, we’re still adding.”

Read more at InsideTowers.com
Posted by Unknown at 10:55 AM No comments:

Rural Nebraska has lost some of its federal funding and is in need of state funding in order to continue high-quality broadband services. In cities, there are more people to use and pay for the cell service, making it worthwhile for companies to spend money on their wireless infrastructure. However, rural areas don’t follow the same rules. Rural areas are becoming harder for carriers to cover because it’s getting more expensive to build in those areas. The cell signal has to reach greater areas and there are fewer customers paying for the service.
The small carriers are at risk because of new regulations that will reduce the federal payments for cable, fiber optic and DSL connections in remote areas, said Michael Balhoff, a Maryland-based telecommunications consultant. (Source: Grant Schulte of the Associated Press)
In order for small carriers to grow without risk, they will need state support and state funding. Without it, the carriers will be unable to provide service in some rural areas because the cost will be too high and the reward too low. This may turn rural areas into an economic wasteland. Without telecommunications services, business won’t be able to run as successfully and profits will decline.
Without the funding, consumers in rural areas would likely see a lower-quality or higher-cost service or possibly none at all, said Cheryl Parrino, a consultant who testified for Nebraska Rural Independent Companies, a trade group. Parrino said fiscal uncertainty and limited funding at the federal level will require Nebraska to play a larger role in keeping the system funded.  (Source: Associated Press)
“In many very-high-cost areas, a business case cannot be made to deliver those services,” Parrino said. “Revenues from customers are simply not enough to cover the cost of deploying, investing and maintaining those operating services.”
Nebraska’s universal service fund distributed $86 million to the state in 2012 but was on track to disperse less than $80 million this year. Nebraska ranks 25th among states in the funding it receives despite its large geographic area and rural population.

Subscribe to our daily newsletter at InsideTowers.com!
Posted by Unknown at 9:55 AM No comments: