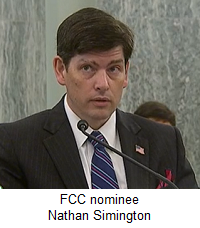 Much of the Senate confirmation hearing for FCC nominee Nathan Simington on Tuesday was uneventful and the full body has yet to act. He appeared with nominees for the National Aeronautics and Space Administration and the Department of Commerce, yet lawmakers only questioned him. Republicans asked questions meant to elicit what kind of FCC Commissioner he would be in general, while Democrats focused on a few specific topics such as 5G, rural broadband and a portion of communications law concerning social media.

It’s the last topic that garnered the most controversial portion of the brief, one-hour hearing. FCC Chairman Ajit Pai recently said he’d move to “clarify” legal protections for social media after President Trump in May directed the Commerce Department to file a petition with the Commission to limit legal protections for platforms like Facebook and Twitter. Trump has said on Twitter they’ve not treated him fairly.

Posted by Inside Towers at 8:34 AM