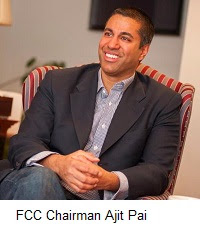 FCC Chairman Ajit Pai Monday said he plans to leave the FCC on Inauguration Day, January 20, 2021. Stepping down when a new president is installed is an agency tradition. In a statement, he called being the first Asian-American to chair the agency “a particular privilege. As I often say: only in America.”

The Chairman listed accomplishments with his colleagues from his time at the helm of the Commission: “Together, we’ve delivered for the American people over the past four years: closing the digital divide; promoting innovation and competition, from 5G on the ground to broadband from space; protecting consumers; and advancing public safety. And this FCC has not shied away from making tough choices. As a result, our nation’s communications networks are now faster, stronger, and more widely deployed than ever before.” Continue Reading

Posted by Inside Towers at 9:04 AM