An AT&T tower in Mt. Olive, MS was damaged by an explosive device planted at the site, according to authorities. A Mississippi man, Victor Schexnayder, 48, of Prentiss, was arrested in connection with the incident by Jefferson Davis County deputies, according to MagnoliaStateLive. The amount of damage was not disclosed.

The device was detonated last Wednesday, causing a power outage at the site on Clem Road. According to authorities, Schexnayder had recently left the carrier as an employee.

“At this point, we do not suspect this is related in any way to an act of terrorism,” Alcohol, Tobacco and Firearms (ATF) South Mississippi Resident Agent in Charge Jason Denham told MagnoliaStateLive. Denham said Schexnayder was charged with felony malicious mischief and booked into the Jefferson Davis County Jail. The ATF, the Mississippi Bureau of Investigation and the Jefferson Davis County Sheriff’s Department are pursuing federal prosecution for the alleged crime.

Posted by Inside Towers at 9:06 AM No comments:

Security of Undersea Cables Should Not be Overlooked: Report

By J. Sharpe Smith, Inside Towers Technology Editor There are 475 submarine cables crisscrossing the world’s oceans under thousands of fathoms of water. While out of sight, these data pathways, which carry 95 percent of the world’s internet traffic, should not be out of mind. They face increasing security threats that have global implications, according to a new report from the Atlantic Council, an international economic and political think tank.

“The security and resilience of undersea cables and the data and services that move across them are an often understudied and underappreciated element of modern Internet geopolitics,” the report said. “The construction of new submarine cables is a key part of the constantly changing physical topology of the internet worldwide.”

The report calls on the U.S. government to work with the private sector and with allies to protect the security and resilience of the world’s undersea cables, screening foreign cable owners for security risks and increasing the funding for the Cable Ship Security Program. Continue Reading

Posted by Inside Towers at 9:01 AM No comments:

Infrastructure Caught in Bill Crush as Lawmakers Return to Capitol

The infrastructure bill, U.S. debt and government funding are all at stake as lawmakers return to Washington, D.C. after weeks away. The Senate returned Monday from its August recess. The House will follow the upper chamber back to the Capitol next Monday, September 20.

Lawmakers will need to rush to meet critical deadlines in the coming weeks, according to CNBC. The speed at which Congress works will determine if the infrastructure bill is passed, whether the federal government shuts down and if the U.S. defaults on its debts.

A congressional logjam looms. Here are some of the measures at issue:

Infrastructure: House Speaker Nancy Pelosi (D-CA) promised centrist Democrats she will hold a vote on the Senate-passed bipartisan measure that contains $65 billion in broadband infrastructure deployment grants by September 27. The promise is non-binding, Inside Towers reported and politics within her caucus could delay the timing. Continue Reading

Posted by Inside Towers at 3:10 PM No comments:

DISH Network asked the FCC for a temporary license to use 600 MHz spectrum band licenses owned by another licensee for 5G tests in Las Vegas and Denver. The company said in an STA filing the owner of the spectrum, Bluewater Wireless II, agreed to allow DISH to use it.   DISH said it needs Bluewater’s spectrum licenses in the two cities to test and validate equipment for its 5G broadband network, using open radio access network (O-RAN) technologies. It needs two non-contiguous spectrum blocks to test carrier aggregation, according to Broadband Breakfast. Continue Reading

Posted by Inside Towers at 9:19 AM No comments:

For Some, the Tragedy on 9/11 Has a Personal Connection 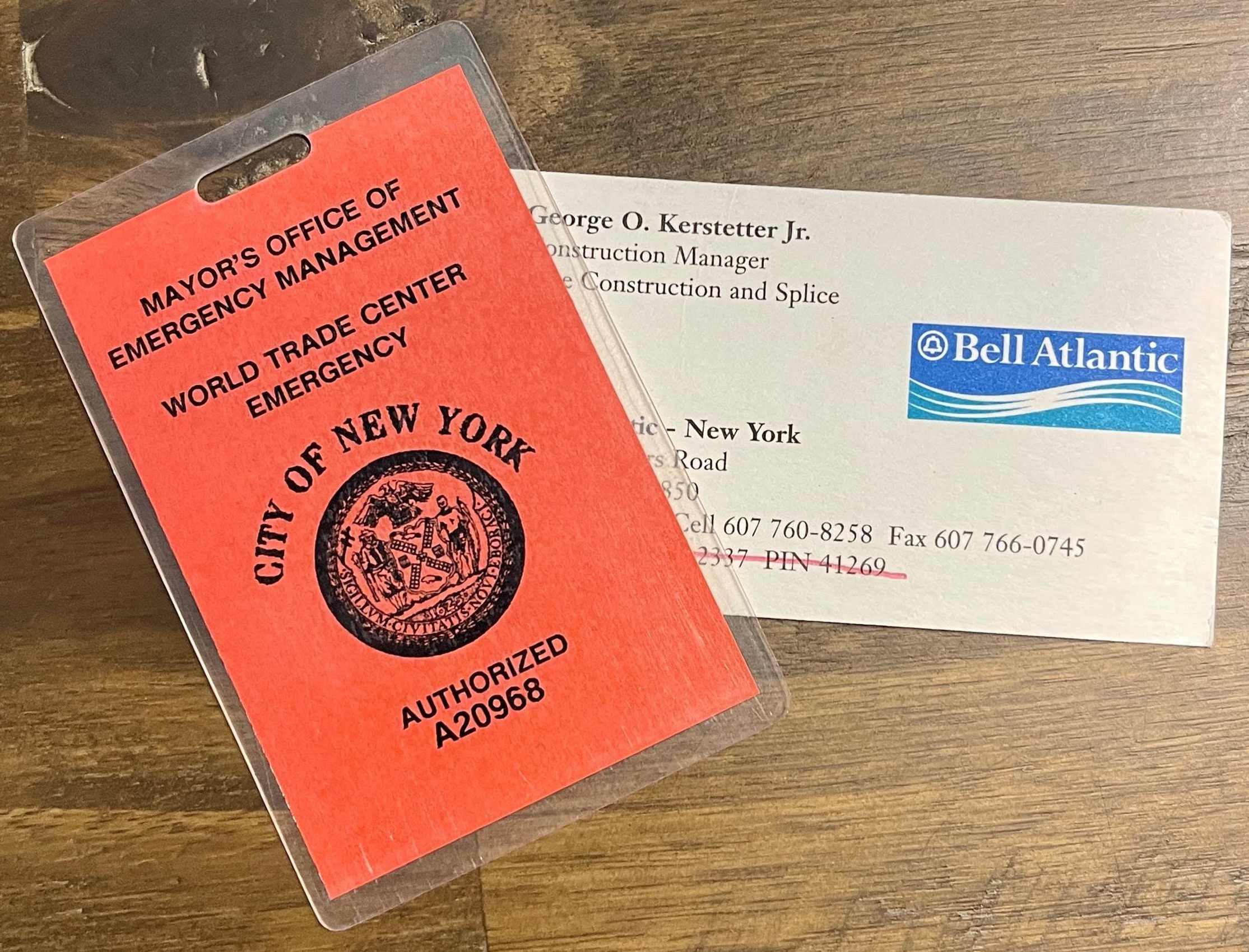 For George Kerstetter, National Solutions Engineer for PerfectVision, this time each year has caused a lot of emotion to come through, and has for the past two decades, as the world remembers the events on 9/11/2001.

Kerstetter was an Operations Manager at Verizon in Upstate New York on that fateful and infamous day. One of his peers, whose office was in one of the Towers, was attempting to clear some issues with an employee's workers comp case when Kerstetter called her to check on her progress.

“That’s when the woman said ‘…the fire alarm was going off’, and she would need to call him back,” Kerstetter told Inside Towers. “Minutes later someone ran into my office and said a plane hit The World Trade Center, which I had just flown over less than a week before, and remembered how majestic it looked. As we watched the day's events unfold, and eventually in horror as each tower came down it became clear to me that I had to go and be a part in whatever capacity they’d let me.” Continue Reading

Posted by Inside Towers at 9:33 AM No comments:

By Leslie Stimson, Inside Towers Washington Bureau Chief Ligado President/CEO Doug Smith says his company is “focused on spectrum we can use to build private networks for companies. Our vision is to bring the power of 5G commercial networks to 5G private networks” by integrating satellite and terrestrial technology.

He spoke during a webinar Wednesday held by Broadband Breakfast for a discussion on the importance of driving competition and innovation in the wireless ecosystem. Asked how soon compatible smartphones would be ready, Smith said in the first half of next year, the company will begin to test its technology and services.

He referenced the 3GPP standard-setting body’s approval of Ligado’s technical spec to enable Ligado, formerly called LightSquared, to deploy 5G networks on L-band. It aims to service enterprise customers in the transportation, agriculture, utilities, and energy sectors. He said the company has authorization to deploy its L-band system on C-band, CBRS and 2.5 GHz. Continue Reading

Posted by Inside Towers at 9:31 AM No comments:

In the years since Hurricane Katrina ravaged New Orleans, the 911 system has undergone a major overhaul. The aging telephone system was replaced. Separate centers for medical, police and fire calls were consolidated under one roof. And new call-routing technology to prevent communications from going down during a disaster was scheduled to be installed early next year.

Then Hurricane Ida hit, and the 911 call center crashed, failing its first major test, according to The Washington Post. Calls for help didn’t go through. The center was offline for 13 hours last Monday. The Orleans Parish Communication District, which runs the dispatch center, had to use Facebook to tell people that if they had an emergency, they should walk to a nearby fire station or flag down a police officer to report it.

Posted by Inside Towers at 8:47 AM No comments: