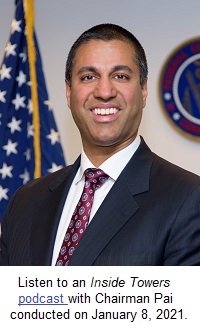 FCC Chairman Ajit Pai says he’s leaving the agency better than it was four years ago. In recent speeches and interviews, he’s called leading the Commission “the greatest honor of my professional life.”

Pai recently told The Freestate Foundation, a think tank, that since he began as a Commissioner in 2012, “I spent a lot of time thinking about what I could and would do if I had the chance to help make the FCC more effective.”

In terms of process reform, Pai’s proud of bringing more transparency and accountability to decision makers. For decades, prior to the Commission’s monthly meeting, his predecessors would circulate their proposals or orders to the other Commissioners’ offices—only. The public only saw the text after the final vote. Continue Reading

Posted by Inside Towers at 9:17 AM